Members of the research group

We study the constructive and instructive role of innate immunity; how its elements are involved in the initiation and regulation of adaptive responses. We focus on the role of the complement system, which links these two immune systems at several points (Figure 1.). 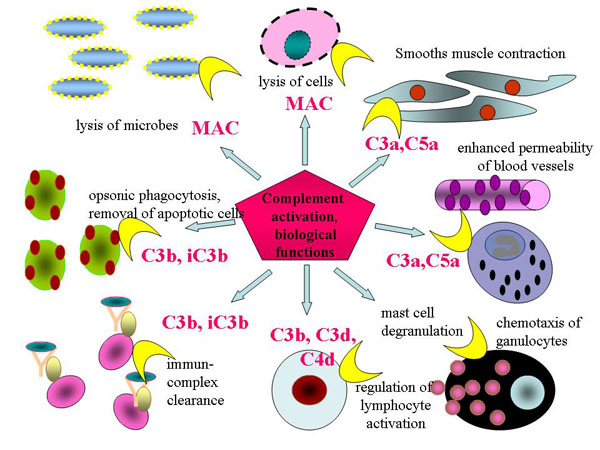 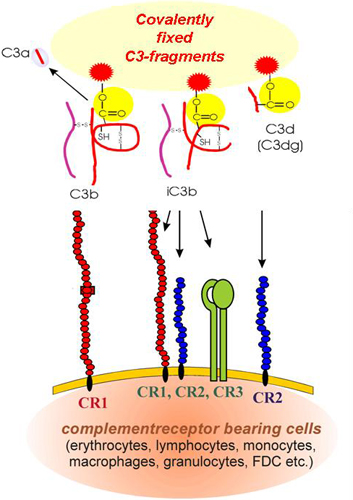 Figure 2. Activation fragments of C3 and its receptors

We focus on the role of complement on various functions of macrophages and dendritic cells. Dendritic cells are known to be important cellular participant of the immune response. These cells orchestrate several processes that are key to immune defense. The complement system is the major soluble component of the host defense against pathogens.
The major complement component C3 has been demonstrated to play key role during complement activation and the regulation of immune response as well. C3 can bind to different complement receptors present on the surface of immune cells, including dendritic cells. The deposition of the activated fragments of complement component C3 allows the binding of opsonized antigens to cells expressing various complement receptors. Dendritic cells, macrophages and neutrophil granulocytes express CR3 and CR4 complement receptors, that are members of the family of β2-integrins. Their similarity is very high regarding their extracellular domain; 87% respectively. The ligand specificity of CR3 (CD11b/CD18) and CR4 (CD11c/CD18) is highly overlapping, and their main ligand is the same: the iC3b fragment. However they differ in their intracellular domain and this suggests fundamental differences between the two receptors. The most important role of CR3 is the binding and phagocytosis of pathogens opsonized by iC3. Our results show that complement C3 dependent phagocytosis of human DCs is mediated mainly by CR3. The role of CR4 is not well characterized and little is known about its function on DCs. Our aim is to determine exact role and function of CR3 and CR4
It has been published recently that primary human C3-deficiency results in an important functional defect of DCs. We examined how covalently fixed C3b influences maturation of DCs. Our results demonstrate that DCs are able to fix locally produced C3b which increases the capacity of these antigen presenting cells to stimulate T lymphocytes. The possible significance of our findings was strengthens by modeling the in vivo situation, where DCs and macrophages are in close vicinity in the peripheral lymphoid tissues. 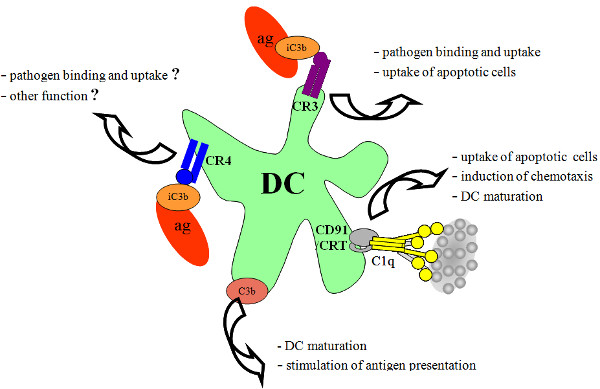 We use “cookies” on the website to provide the best user experience to our visitors in addition to secure browsing. You can change your cookie settings at any time in your browser settings. More information