My main interest is the regulation of the humoral immune response, the “crosstalk” between receptors expressed on B lymphocytes. Binding of antigens and other ligands to the corresponding receptors on B cells stimulates intracellular signalling pathways that interact with each other and construct signalling networks determining the fate of the cell: activation, proliferation, differentiation or cell death. Simultaneously bound ligands induce signals that may collaborate and control B cells’ negative or positive selection, playing crucial role in maintenance of tolerance.

Failed positive selection may result in the development of autoimmune diseases. In our earlier works we studied the function of FcγR expressed on various cell types, identified the phosphatase responsible for FcγRIIb mediated inhibition of human B cells. We investigated differential signalling in immature and mature B cells and the function of the adaptor protein; Grb2 associated binder (Gab2) in B cell signalling. We have first described that Gab2 couples BCR mediated signals to cell survival. Disregulated signalling or failure in receptor crosstalk may lead to survival of autoreactive B cells, which escape from control and instead of remaining quiet or being deleted, produce autoantibodies against self tissue components. This might lead to the development of autoimmune diseases.

Recently we are working on Rheumatoid arthritis (RA), a systemic autoimmune disease. Approximately 70 % of RA patients produce autoantibodies specific for citrullinated self protein (anti-citrullinated protein/peptide antibodies, ACPA) (Fig. 1). First, by using a citullin/arginin containing peptide panel, we want to characterize various patients’ groups that may have different prognosis or might need different therapy. In collaboration with the MTA-ELTE Research Group of Peptide chemistry our aim is to identify new citrullinated peptide epitopes that can be used for diagostic purposes and that are suitable to develop novel diagnostic and therapeutic tools. We also study if receptor crosstalk in B cells from RA patients differs from that of healthy controls, and try to identify potential new drug targets. The present biological therapies do not cure the disease, only reduce symptoms; in our new project we will follow the recovery of various B cells subsets after biological therapy, and the role of regulatory B cells in RA. Finally, we study a mouse model of rheumatoid arthritis, collagen induced arthritis and want to clarify the role of T-bet and regulatory B cells in the disease pathomechanism.

Rheumatoid arthritis (RA) is a systemic autoimmune disease, has a worldwide distribution with an estimated prevalence of about 1%, currently there is no cure for the disease. Therapies may only reduce the pain and stabilize the condition of the patients. Anti-citrullinated protein/peptide antibodies (ACPA) are present in sera samples of about 80 % of the patients. Detection of antibodies in patient's sera recognizing cyclic citrullinated peptides (CCP) has diagnostic significance. Identification of novel citrullinated peptide epitopes provides a better diagnosis of the disease, dissecting the patients into subgroups that may have different prognosis or need different therapy. The peptides are synthesized at the HAS-ELTE Research Group of Peptide Chemistry. 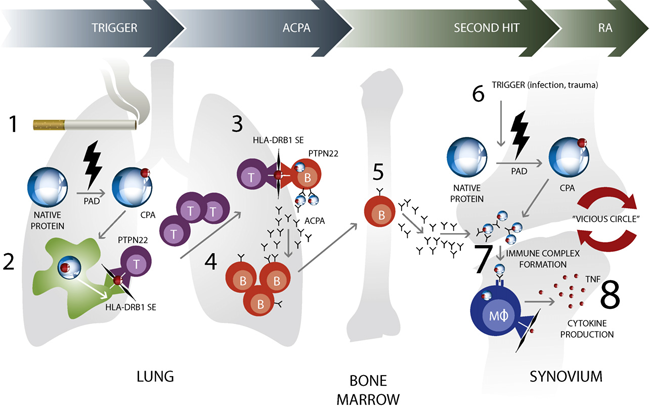 1.) to develop new tools for the detection of ACPA, thus for the early diagnosis of RA. We develop and assess the diagnostic performances of immunoassays based on the recognition of new citrullinated fibrin/filaggrin/vimentin/collagen-derived synthetic peptides corresponding to the immunodominant epitopes recognized by ACPA. We also want to identify epitope peptides that are recognized by BCR on B cells of RA patients

2.) to design and synthesize bispecific multivalent peptide constructs that can be recognized by BCR on one hand and trigger effector mechanisms on the other. Such constructs would allow the development of potential therapies designed to eliminate B-cells responsible for ACPA production.

3.) to reveal the mechanism of B-cell regulation by FcγRIIb enhanced antibodies (FcγRIIbE), and its consequences on the life of B-cells. FcγRIIbE anti-CD19 antibody may inhibit B-cell signaling without killing the cells. We will gain new information on the interaction between CD19, Fcγ and toll-like recepetor 9 (TLR9) on B-cells, and elucidate the mechanism of B-cell inhibition by FcγRE antibodies, possibly applicable for RA therapy.

The multiple level of immunoregulation in Rheumatoid arthritis: the role of B-cells

Recent data strongly suggest that B cells are central players in RA. We want to investigate B-cell dependent factors in the pathogenesis of rheumatoid arthritis at the level of: autoantibodies (ACPA), B-cell subpopulations including naive, memory and regulatory B-cells, cytokine secretion, biological therapies and a mice model, collagen induced arthritis (CIA) (Fig. 2).

Fig. 2. The multiple level of immunoregulation by B cells (left)
Paws of CIA mice (right, up), bone deformities of an RA patient (right, down).

1.) Our aim is to set up a HTS system based on Surface Plasmon Resonance analysis for screening the sera of RA patients and compare the affinity of antibodies specific for previously identified and new citrullinated peptide epitopes. We will also screen RA sera by an antibody-complement microarray (ABC array). Question: can we divide patients into subgroups having different severity of disease or different response to treatment based on affinity differences or complement activation properties of ACPA?

2.) Effector B cells may produce pro-inflammatory cytokines, while regulatory B cells (Breg) secrete IL-10 and contribute to the attenuation of immune response.
Questions: What kinds of stimuli induce cytokine secretion by B-cells? We want to identify signals resulting in differentiation of regulatory B cells. Are B cell subsets different in healthy donors and RA patients?

4.) The transcription factor, T-bet is synergistically induced by BCR and TLR9 mediated signals in mice. Questions: how T-bet expression is regulated in different B cell subsets, how T-bet could contribute to the pathogenesis of CIA?

The combined data on specific recognition of citrullinated peptides and on the affinity of ACPA will provide better chance to dissect RA patients into subgroups, that might need different therapies and/or might have different prognosis of the disease. Exploring the signals leading to differentiation of Breg cells and resulting in cytokine secretion by various B cell subsets would support the development of new B cell targeted therapies. Monitoring the recovery of B cell functions after biological therapies will help to understand the mode of action of the biologicals as well as the pathomechanism of RA. Studying the mice model will provide new data on the role of transcription factors and regulatory B cells in the model of autoimmune arthritis.

We use “cookies” on the website to provide the best user experience to our visitors in addition to secure browsing. You can change your cookie settings at any time in your browser settings. More information